WHO WAS CHRISTINA TAYLOR GREEN? 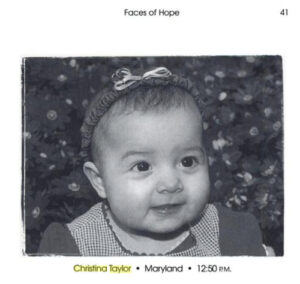 Christina Taylor Green was 9 years old when she died. She was born on 9/11/01 in Maryland, according to the Faces of Hope book written by Christine Pisera Naman from Monroeville, PA. Her name in the book is “Christina Taylor” on page 40. Her life ended on 1/08/11 when she was allegedly shot to death by Loughner at in the Safeway parking lot where Congresswoman Giffords was holding a Congresswoman on Your Corner event.

It is this book that we learned through the mainstream news that Christina was a 9/11 baby. The public was fed the depressing news over and over again for weeks and the nation was forced to re-live the remembrance of 9/11 again under the Obama Administration. What better scenario could the government have than to exploit the death of a 9 year-old girl who was born on the day of the 9/11 attacks and died on a day that numerology tells us is the equivalent of 9/11. (January 8th, 2011 = 01+08=9 and 2011 = 9/11). So in essence, the Obama Administration brought about the true birth of a horrendous conspiracy, while making a satanic 9/11 territorial marking in Tucson. A territorial marking that the NWO has taken control of Arizona.

The shooting sparked non-stop coverage on mainstream media, as well as the AP Press focusing on bigotry, mental health, and gun control. For months following, there was nothing but political chaos and a devious cover-up was underway as everyone focused on Gabrielle Giffords, Jared Lee Loughner, and Christina Taylor Green. 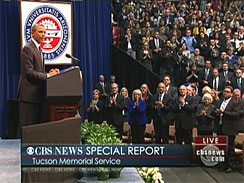 Shortly after the shooting, President Barrack Obama swept into Tucson with a truckload of t-shirts to address the nation. A giant memorial was held at McKale Memorial Center/University of Arizona. Many people have commented in social forums that Obama exploited the death of the alleged 9/11 girl.

Several questions have come up that remain unanswered during the investigation of Christina-Taylor Green. Here again, Ed Charini from WellAware1 (shill) claims Christina Green is a fictitious character and/or an actor who is part of the Greenberg/Sexton family. Other researchers claim she is an actor that took part in a staged shooting. I do not doubt the event was staged, but I will dispute that she is an actor or that she is part of the Greenberg family. What I do question however is who she really is, why her parents acted the way they did during the event, and her ties to professional sports (Father was scout for LA Dodgers & Grandfather was Dallas Green- Phillies). A known pipeline for pedophilia and child trafficking. I will discuss her parents in a later section. 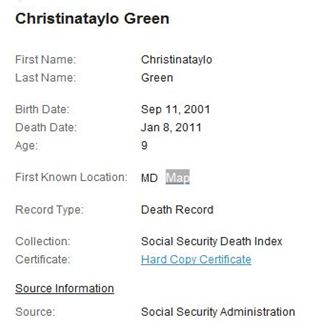 Maryland is a closed state and does not allow for a copy or verification of birth certificates unless you are an immediate family member or have power of attorney. In 2011, in an Archives.com search, the Social Security Death Index did have her listed but was entered with a typo making it more difficult to confirm through normal public searches to confirm her death and birth.

At the time, the Social Security Death Master file (SSDMF) did not have Christina Taylor Green listed in the September 11, 2001 death index. In this database search, you can find deceased people listed by their birthdays. There are approximately 33 deceased children listed that were born on 9/11/01. As of November, 2011, the SSDMF have no 9/11 children listed dying in 2011. Christina is not listed at all in the master Social Security Death Index. There are no children born on 9/11/01 deceased that were assigned a Social Security number from Maryland as of Nov. 2011.

Update: As of August 2020, the SSDMF still does not have Christina Green listed either birth, nor death and there are 30 9/11 babies listed as deceased.

Christina attended Mesa Verde Elementary School in the Amphitheater School District, 1661 West Sage Street Tucson, Arizona. Christina was in 3rd grade in the 2010-11 school years. She was a newly elected student council member. Her teacher was Mrs. DeKnikker, according to the media reports following the shooting. The school district is named the Amphitheater, which derives from both Vepasian’s and Titus’s family name (Flavius, from the gens Flavia). The Flavian Amphitheater is located in Rome. It has a seating capacity of 50,000 spectators and was used for gladiatorial contests and public spectacles such as mock sea battles, animal hunts, executions, re-enactments of famous battles, and dramas based on Classical Mythology.

According to the school district’s website in 2011, there were three third grade teachers in Mesa Verde. Each teacher is assigned a classroom number. They are 14, 15, 16 – Christina was in room 14, which is where Mrs. DeKnikker taught the 3rd graders. 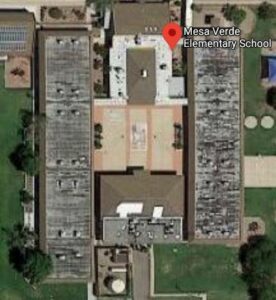 While investigating in Tucson, I went undercover with another researcher (Sheldon Day) to get information about the school. I wanted to find out if Christina was really a student there since the trolls were filling up the internet forums at the time claiming she was a crisis actor. The school was a very small building with gates and housed students in a double rectangular building in a strange eerie resemblance to the 9/11 twin towers.

Outside the school, on the information board, there was an announcement that the school was going to participate in the NASA Down-Link was to occur with Astronaut Mark Kelly, also known as the husband of Congresswoman Gabrielle Giffords, one of the shooting victims.

Upon arrival at the school, we looked around and went into the main office to ask questions. Upon arrival of the office, there were some memorial items in honor of the 9/11 girl. We asked the office worker if the school was purposely picked by NASA to receive the down-link because of the death of Christina Green. The answer was surprising when the office worker told us that they were NOT chosen because of the death of one of their students and they had won the down-link only through the normal application process. “They were not getting any special treatment due to the 9/11 girl’s death”, the staff member responded. The response was accepted at the time for face value until approximately a week later, KOLD13 confirmed the original suspicions that Mark Kelly himself had chosen the school specifically because of the death of the 9/11 girl. Why would the school need to lie about such an innocent question? Why would the office lady deny the school was picked because of Christina and tell us that it was a random application process? 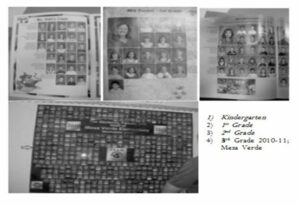 After leaving the office, we then infiltrated the library to see if there were any yearbooks to get confirmation that Christina attended the school. We had found the yearbooks that confirmed Christina attended k-2nd grade. At the time, no yearbook was released for the 2010-11 year, which would have confirmed her attendance in 3rd grade. We captured photos from the yearbooks. These photos hold value as they do confirm that a ‘girl’ named Christina Taylor Green attended the school and the pictures did match the mainstream and AP press photos released in the media.

In the library, a shocking discovery became known when a picture of Mark Kelly was in the display case. It seems odd that 3 times, Mark Kelly was brought up in this case. First, when the announcement was made that his wife, Gabrielle Giffords, was shot by Jared Lee Loughner – second, when the office denied the down-link was chosen by Mark Kelly himself – third, when his picture appeared in the Library of the dead girl’s school.

We questioned the librarian about Mark Kelly’s signed photo found in the display case. She claimed that a staff member obtained the autographed photo prior to the shooting event. She could not name the staff member that obtained the photograph from Mark Kelly.

Between the lies that the office personnel told and finding the photo of Mark Kelly in the library, more research into the school needed to be done. I wanted to know who was in charge at the time of the shooting. As the investigation into the 9/11 girl preceded forward, key figures of the school were of further interest.

Immediately following the shooting, AllState Foundation, Little Tikes Corporation, the Sundt Foundation, and the JohnJay and Rich Care For Kids Foundation, gifted Mesa Verde with $140,000 to rebuild the schools playground in honor of the 9/11 girl. The Injury Free Coalition for Kids at Columbia University’s Mailman School of Public Health also partnered on building the project by, among other things, getting design ideas for the nearly 2,000-square-foot play area from Christina-Taylor’s classmates.

Jeff Grant  at the time was the President of Amphitheater School District, Tucson – Jeff Grant is retired and spend his career in Human Resources. He received his bachelor’s degree in Education. He has spent 8 years on the Amphitheater governing board. He is also a youth coach and board member for Little League baseball, AYSO soccer, and many other civic organizations. Grant handled the donations the school district received for playground equipment and technological upgrades. Dennis Bailey was the Field Senior Vice President of Allstate in Arizona.

Kent P. Barrabee, Ph.D. – at the time was a governing Board Member of the Amphitheater School district. According to his bio, he graduated from Harvard University. He received his master’s degree in early childhood education from Bank Street College. He went on to receive a doctorate in elementary education from University of Arizona. He is praised and received an honorary award from Future Farmers of America degree from his local chapter. His previous record of community service includes being president and vice-president of the District Governing Board. Arizona School Boards Association representative to the Federal Relations Network, president of the CDO Parents’ Organization, a member of CDO’s Advisory Council, a member of the Superintendents Community Council, an assistant coach and referee in youth soccer, and an umpire in the Little League. Christina Green was a member of the Little League. He also writes for Beit Midrash—House of Learning, Congregation Chaverim Chai Lights Jewish Newsletter. Gabrielle Giffords also attended the Congregation Chaverim. 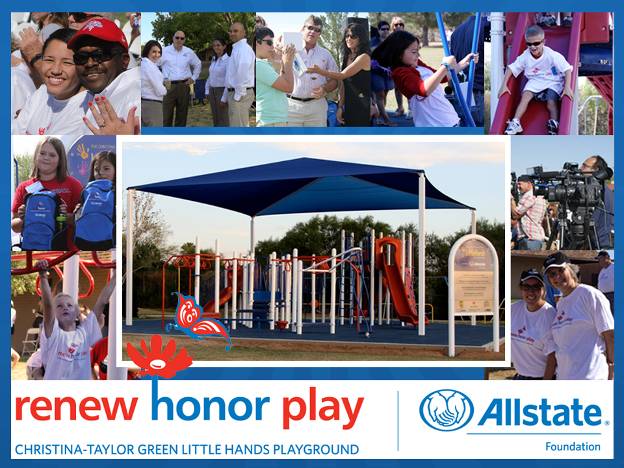 The playground colors were chosen by Christina’s classmates to reflect the school colors – red, blue, and white. They also chose a butterfly image as the playground focal point, since Christina loved butterflies and frequently drew them in her artwork. The playground was named the Christina-Taylor Green Little Hands Playground.

Following the Tucson shooting, gun control was the focal point on mainstream media. They aired a parade, a memorial, the funeral of the 9/11 girl and transformed an entire park into the memorial of Christina Green. However, under closer investigation, it turns out the funeral was staged, the park was more of a satanic ritual, and the lies about the shooting continued. In another chapter, I will reveal more information pertaining to Christina Green, her parents, her Philadelphia Phillies Grandfather, Dallas Green, the funeral home, and more lies… At this point, I wondered, was the 9/11 girl murdered by Loughner or was she sacrificed in a Tucson 9/11 ritual? 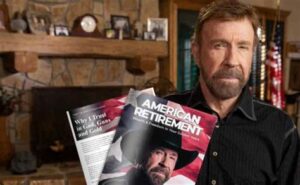